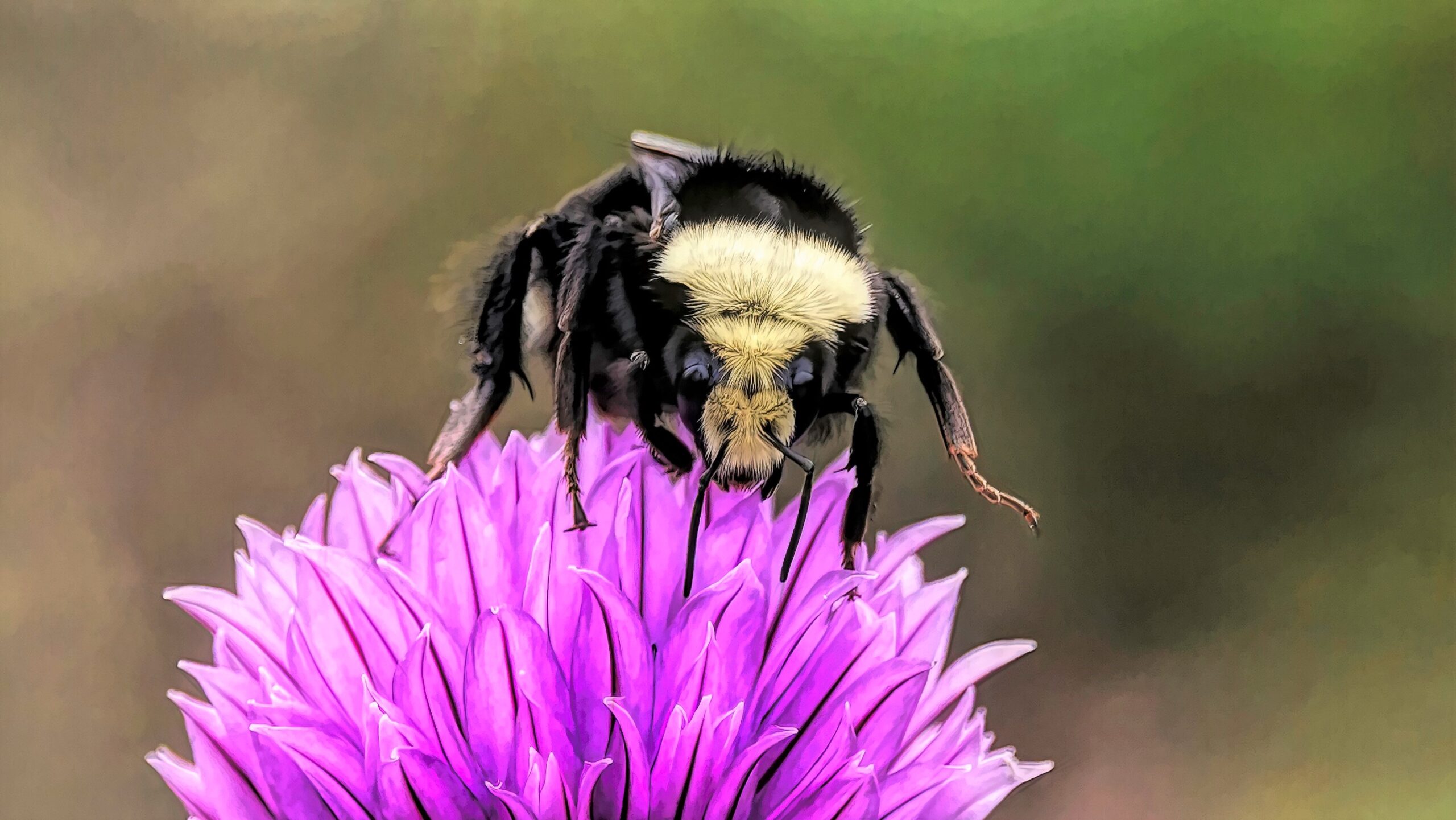 This spring a medical issue has kept me mostly at home and able to walk only short distances with a walker. That meant that I was unable to get out walking on my favourite trails and exploring with my camera. However, in late May I discovered that one of my neighbours had a large herb garden in their front yard and it was humming with bees. So I started visiting this garden regularly since I could sit on my walker and observe, from the sidewalk, the bee activity in the chives and thyme which were in full bloom.

There were several varieties of bees visiting the flowers but the most numerous were the bumblebees, so I thought that this would be the perfect opportunity to learn about them.  I started taking lots of photos and using them to try and see the differences in colours and banding that are used to separate the different varieties. The yellow-faced bumblebee, one of our most common species, was an easy one  to identify since it is basically just black and yellow. But I soon discovered that other species can be tricky to ID since they show varying patterns of yellow, orange and black bands on their abdomens. Also, males can sometimes look different from females and even though queens and worker bees are both female they can show slightly different colour patterns as well. Luckily, by observing the bumblebees in the spring I was seeing mostly females, the queens and the workers, since the males don’t usually appear until later in the season.  But even that can be unpredictable depending on species and how early in the spring the queens emerge from hibernation and start their nests. So, if you would like to try your hand at bumblebee identification, I would suggest starting as early as possible in the spring. Also, females can be easy to identify because only they carry pollen on specially designed structures on their hind legs. So, if you see a bee carrying balls of pollen you know that it is a female. The male bees that you will see visiting flowers later in the season are feeding on nectar but not collecting pollen.

During this learning adventure I was gifted a book called “The Bees In Your Backyard” by Joseph S. Wilson and Olivia Messinger Carrill which is a good introduction to all the bee species found in the US and Canada. It provides some stunning photos and, while not actually a field guide to the species found in our area, it is a good introduction to bees in general. The book describes their natural history, where they nest, how they gather food and their role as pollinators. Here are some interesting tidbits of information about bumblebees that I gleaned from this book.

Apparently, fourteen species of bumblebees have been recorded on Vancouver Island. Including these five in the herb garden, I have seen eight species, so I still have more hunting to do once I am able get out and about again.  I hope that you have a better appreciation for these furry garden visitors and if you would like to try your hand at identification I can highly recommend the following reference:

A Field Guide to The Bumble Bees of Washington State  https://washingtonbumblebees.org